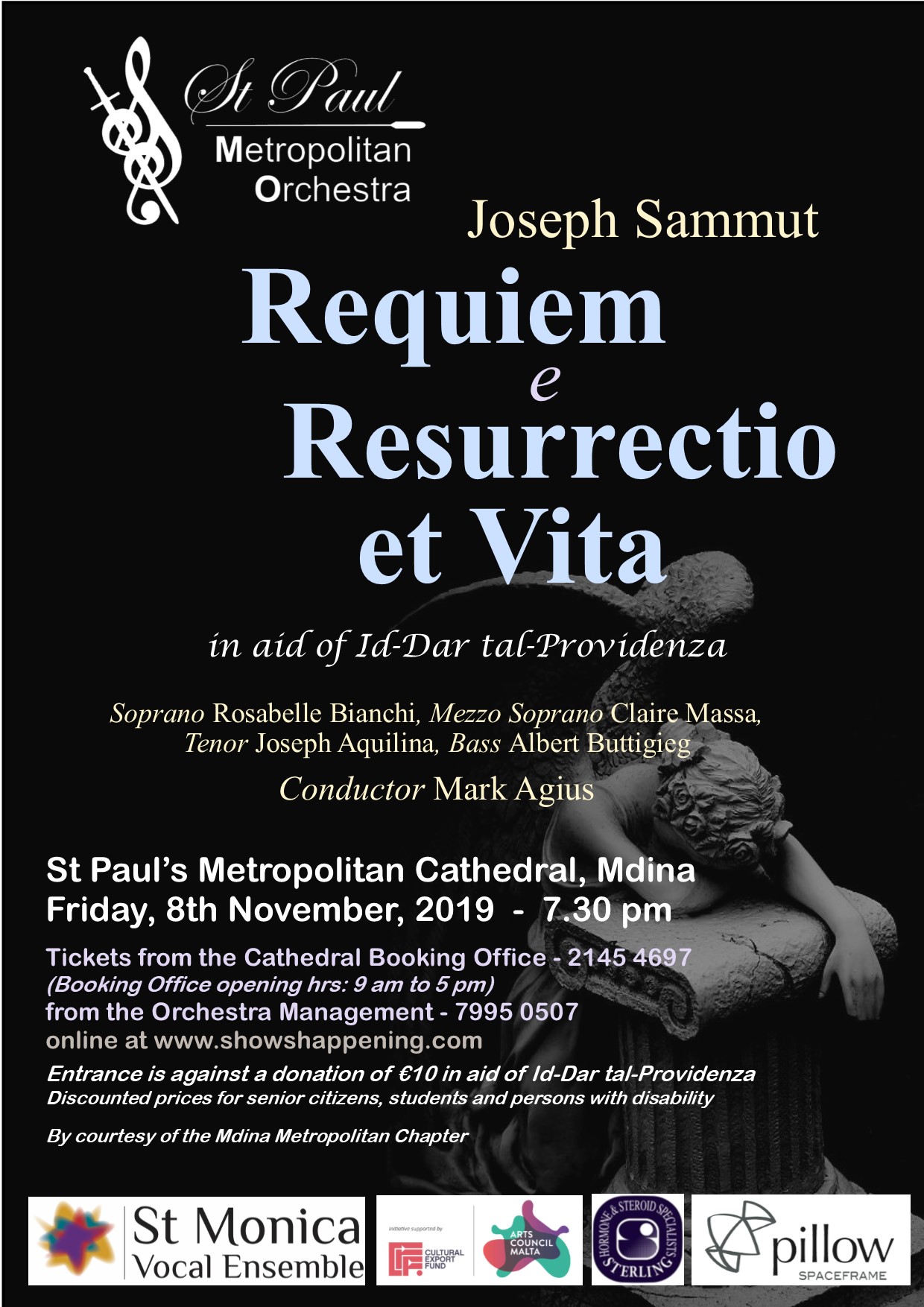 The St Paul’s Metropolitan Orchestra will be embarking on another huge project. The Orchestra will be performing the internationally acclaimed Requiem et Resurrectio et Vita(1991). This is considered to be one of the finest musical compositions of the sacred repertoire, composed by a 20th-century Maltese composer, Mro Joseph Sammut.

The St Paul Chamber Ensemble, organised a flash mob which was then followed by a concert in collaboration with the Anacrusis Concert Choir under the Direction of Mro Mark Agius at Mater Dei Hospital. The best parts of the concert where recorded and published on social media for our followers. Click on the below picture to watch the video. 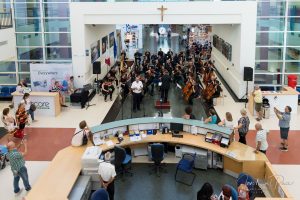 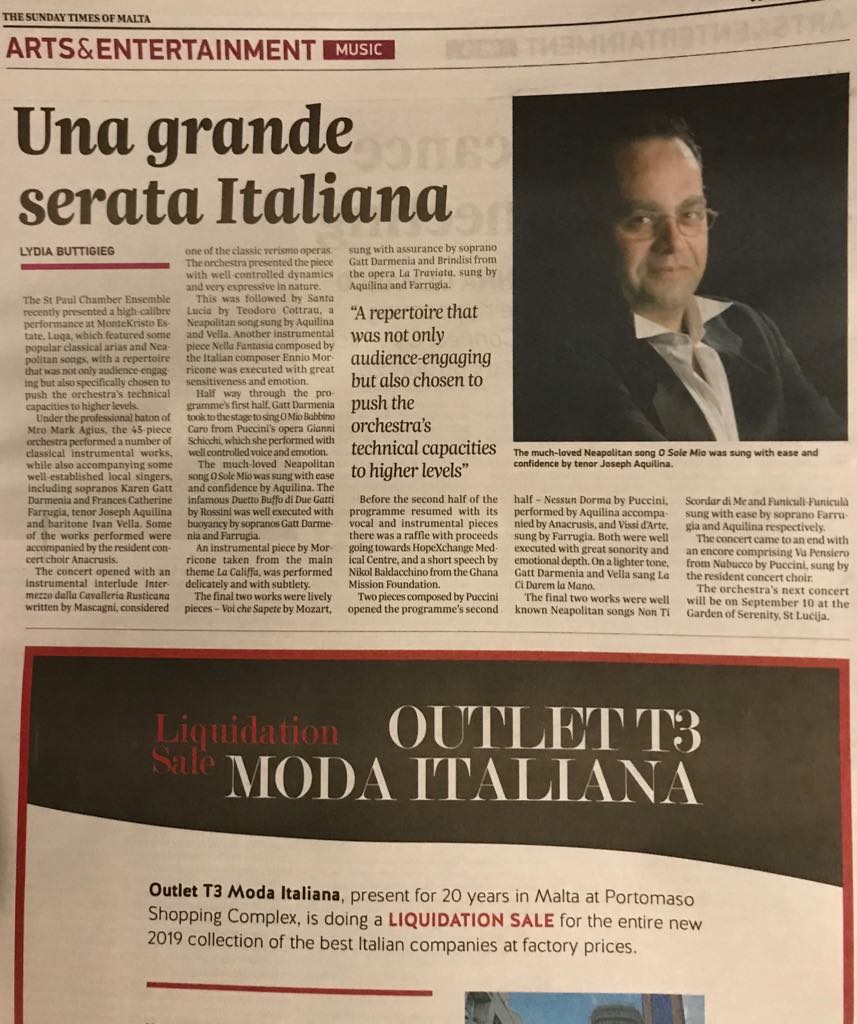 The St. Paul Chamber Ensemble recently present a high-calibre performance at MonteKristo Estate. Find below the articles recently published in the local news in relation to this performance, which according to critics was “A repertoire that was not only audience-engaging but also chosen to push the orchestra’s technical capacities to higher levels” 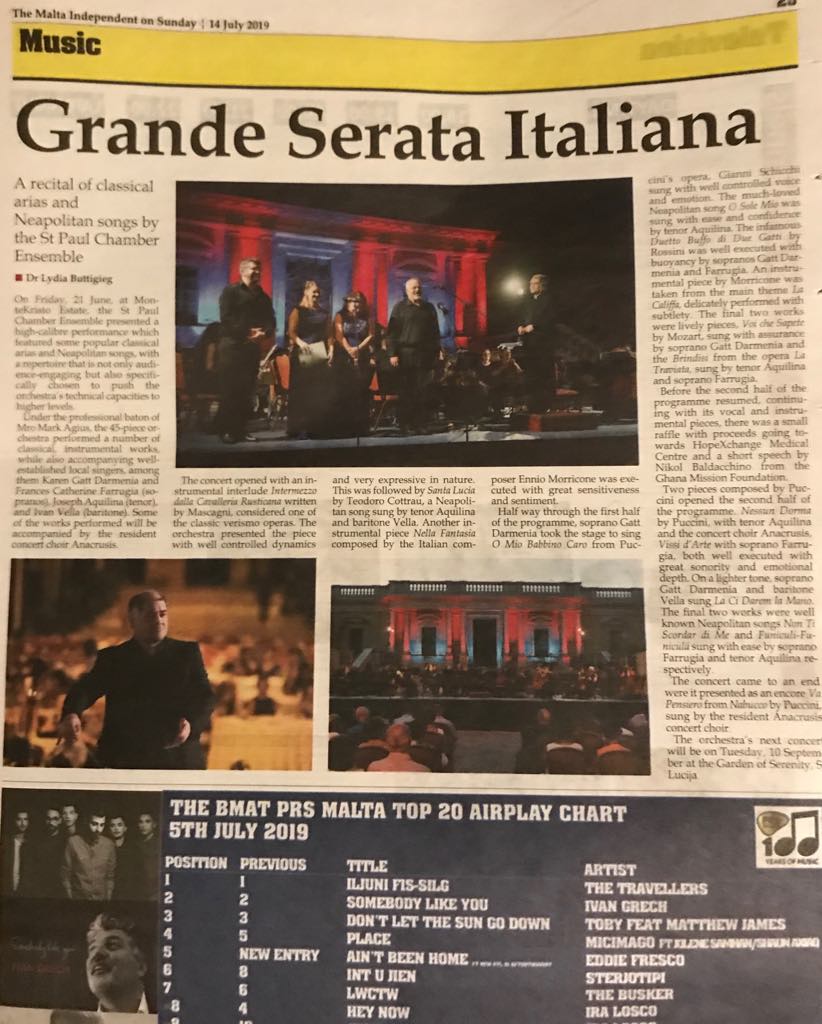 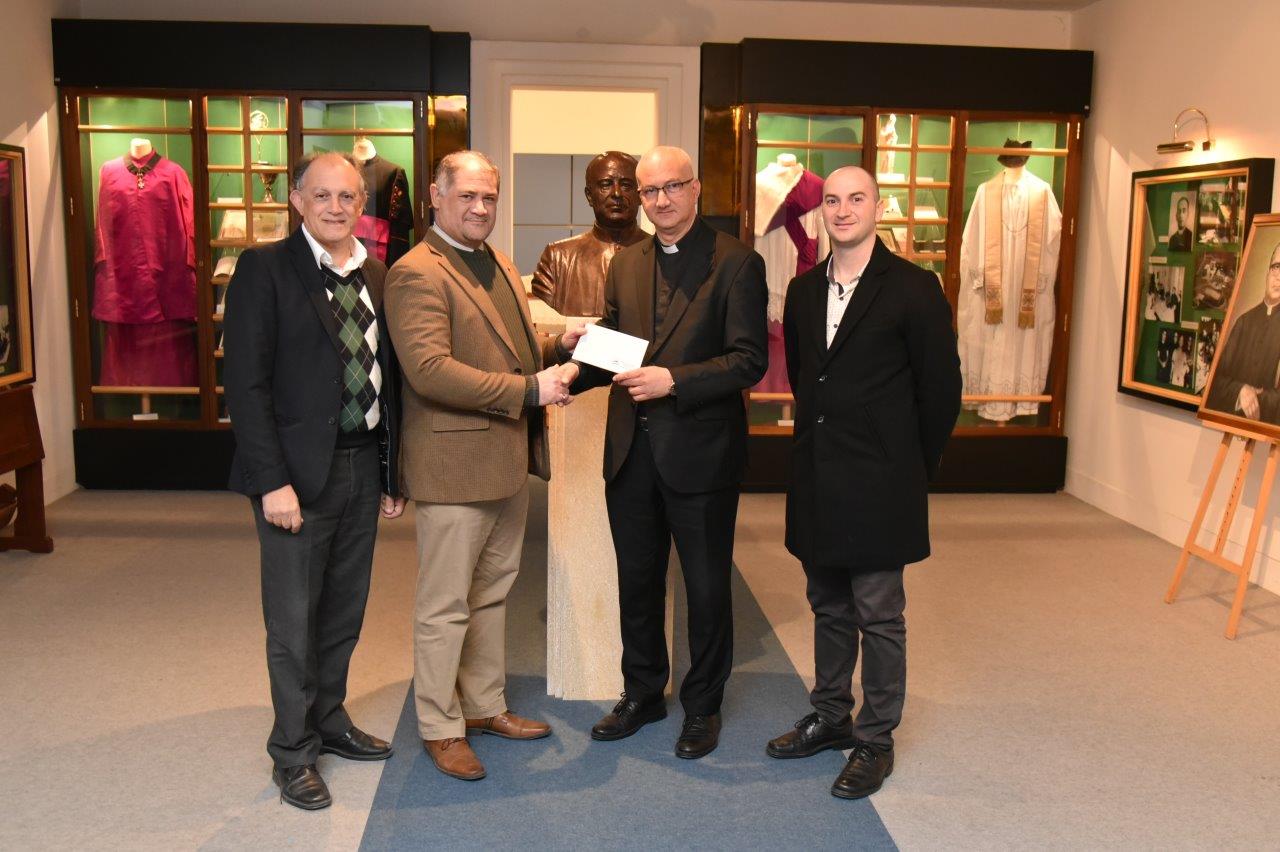 Following its Christmas recital, HE Chev Mro Mark Agius in the name of the St Paul Chamber Ensemble presented another donation to Fr Martin Micallef in aid of Id dar tal Providenza. 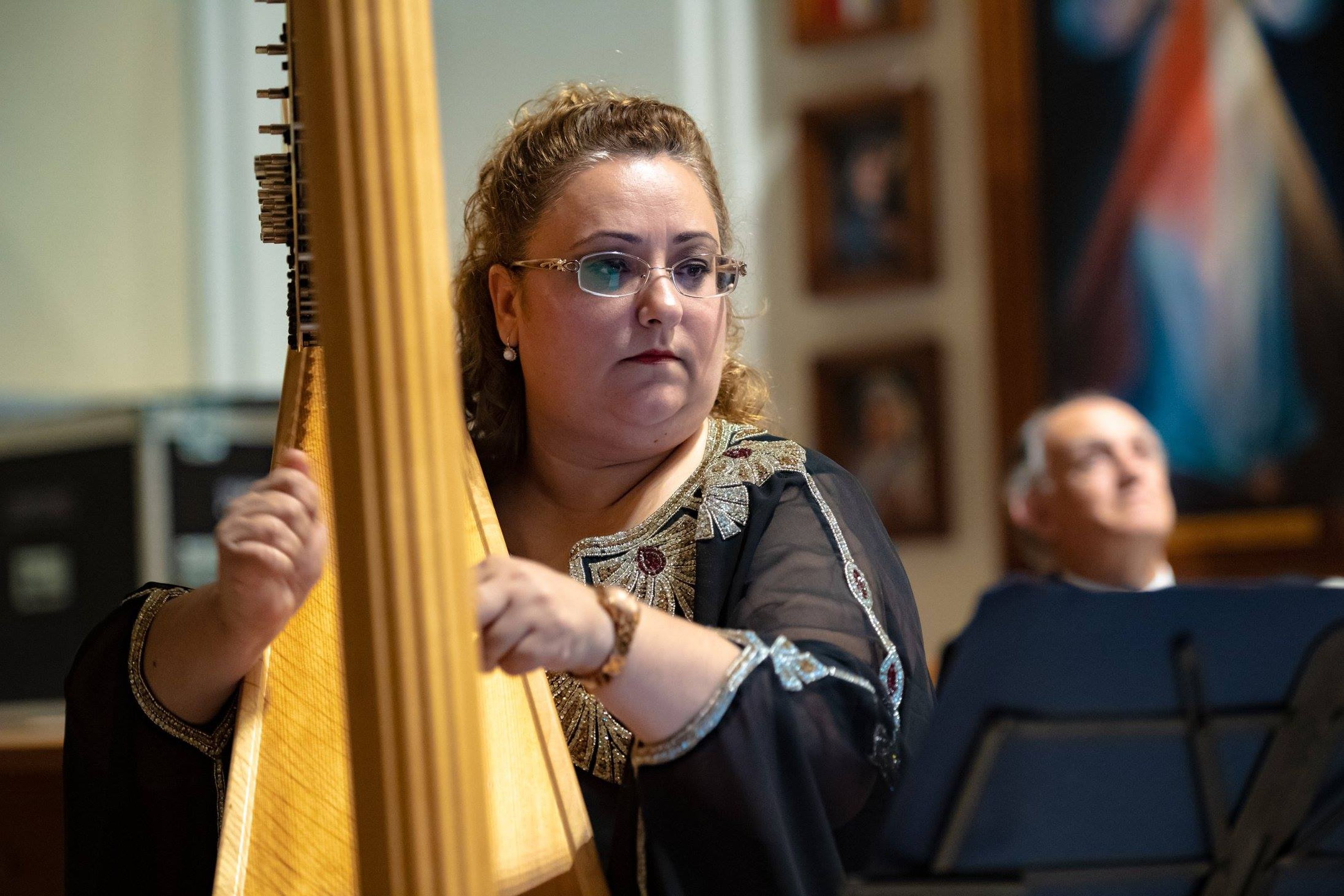 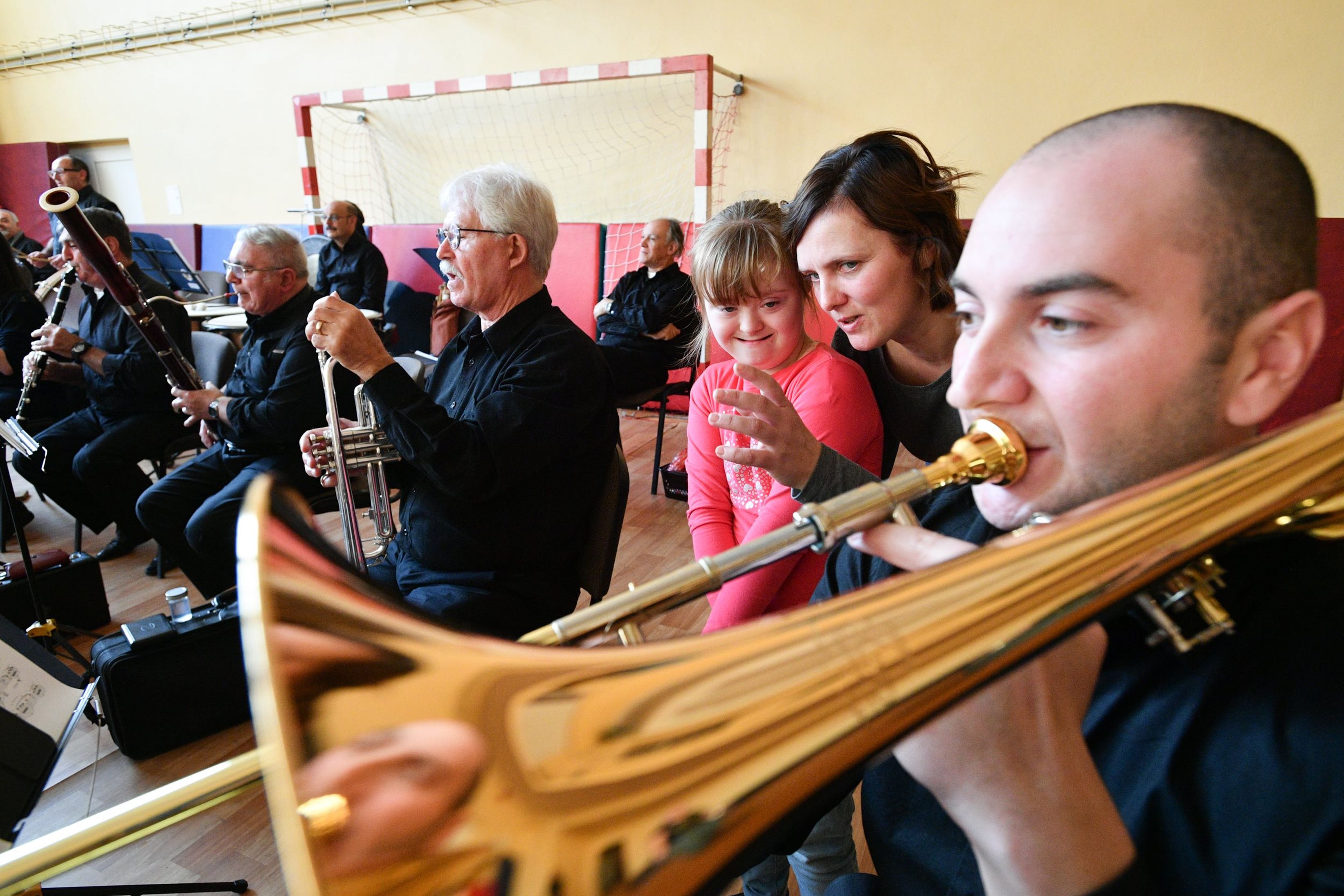 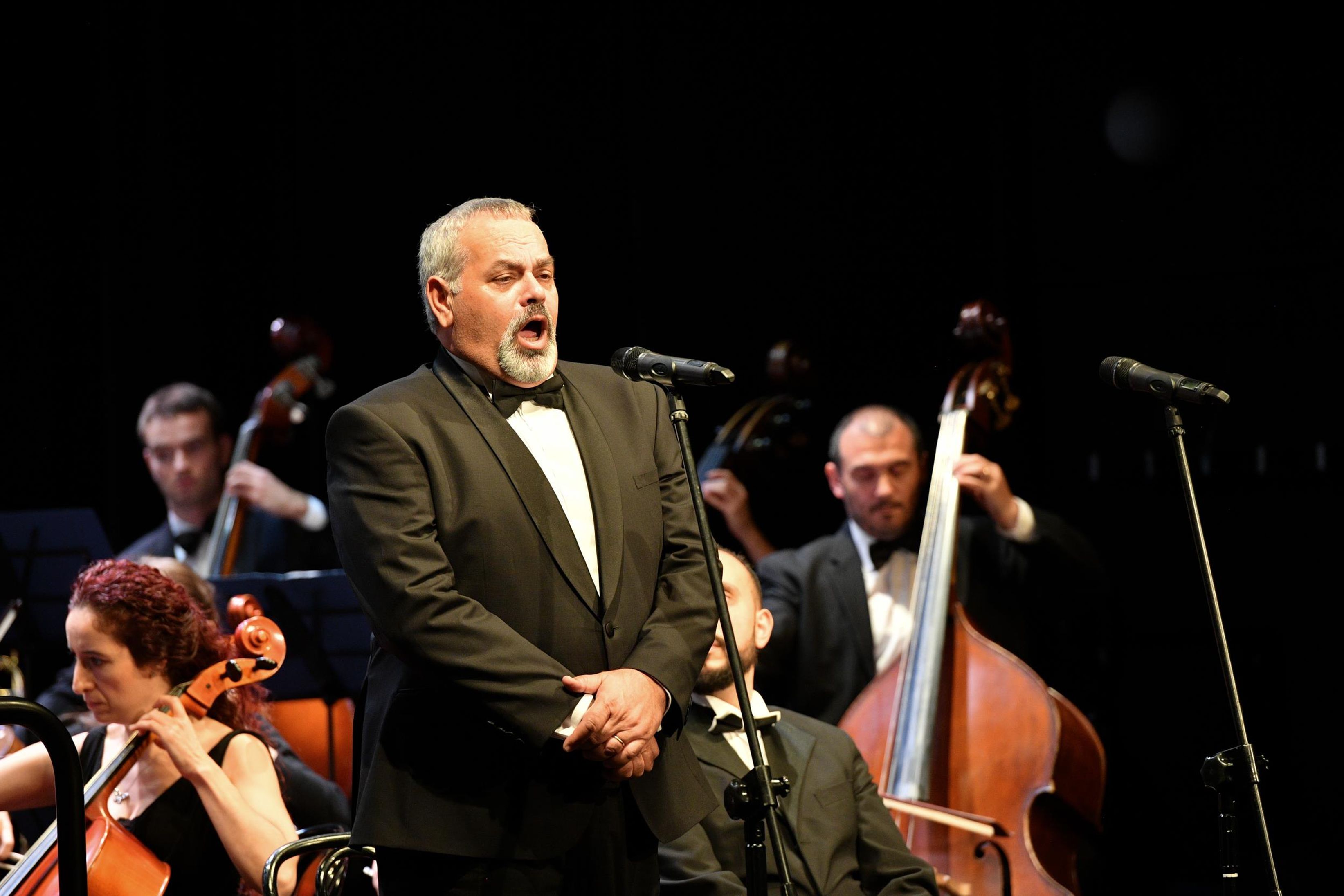 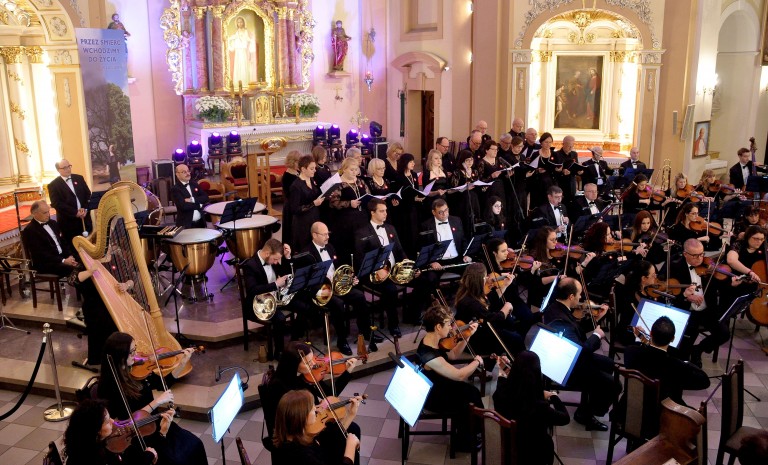 KĘPNO 6th November 2018: The St Paul Chamber Ensemble from Malta performed the Messa da Requiem by Mro Mark Agius on the occasion of the centenary of the outbreak of the Greater Poland Uprising and the 100th anniversary of Poland’s regaining of Independence.

This was also mentioned in a Polish news feature: Malta Ensemble Tours Poland . The local authorities have also reported our international performance: Polish-Maltese Collaboration in the Area of Special Needs Education . 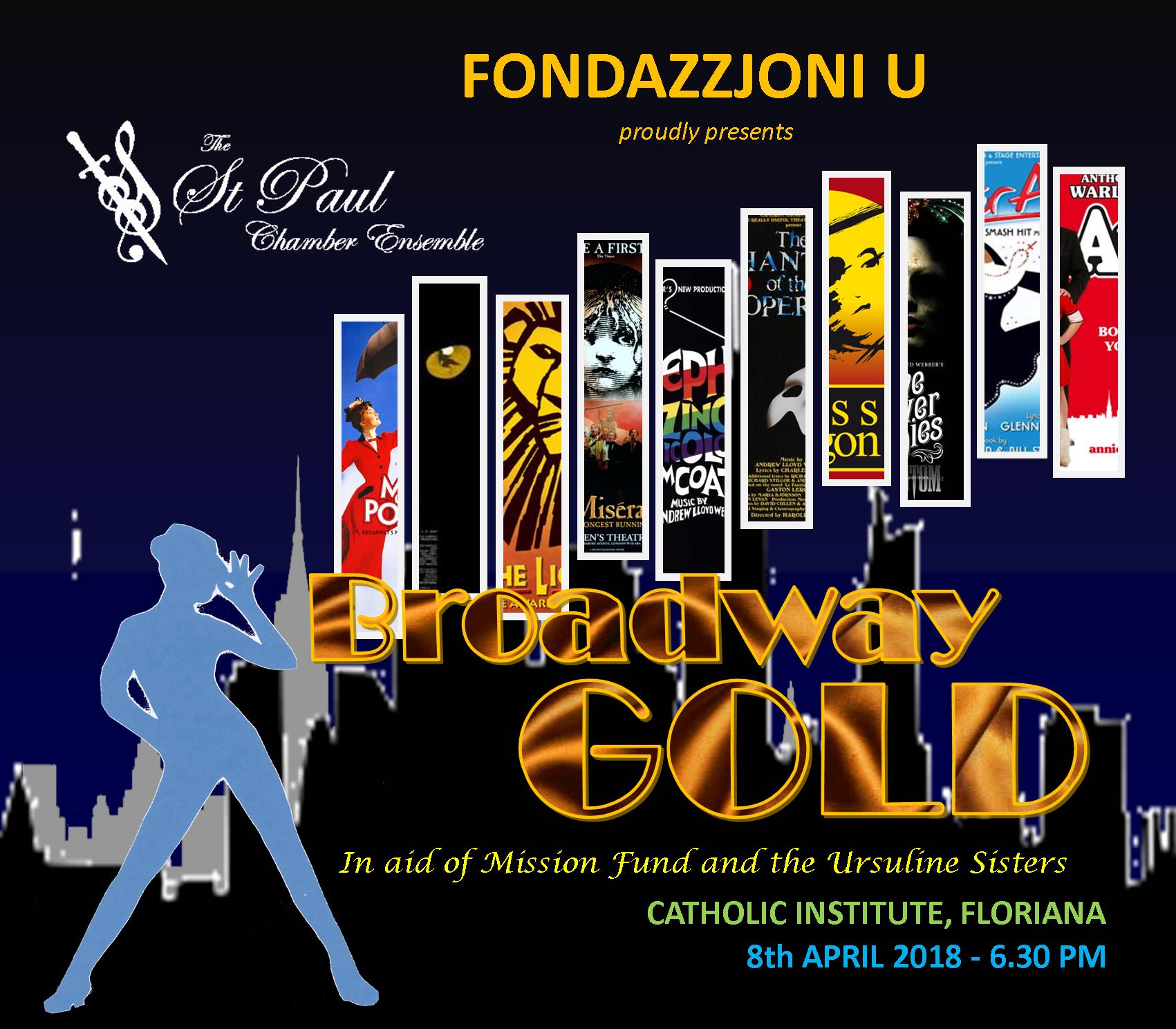 In collaboration with Foundation U, the St. Paul Chamber Ensemble presented ‘Broadway Gold’. This concert was held at the Catholic Institute Floriana and featured musical excerpts from Cats, The Phantom of the Opera, Les Miserables, Sound of Music, Annie and Sister Act, Sound of Music amongst others. A fantastic concert for all the family was performed which also including animated characters and a magician. 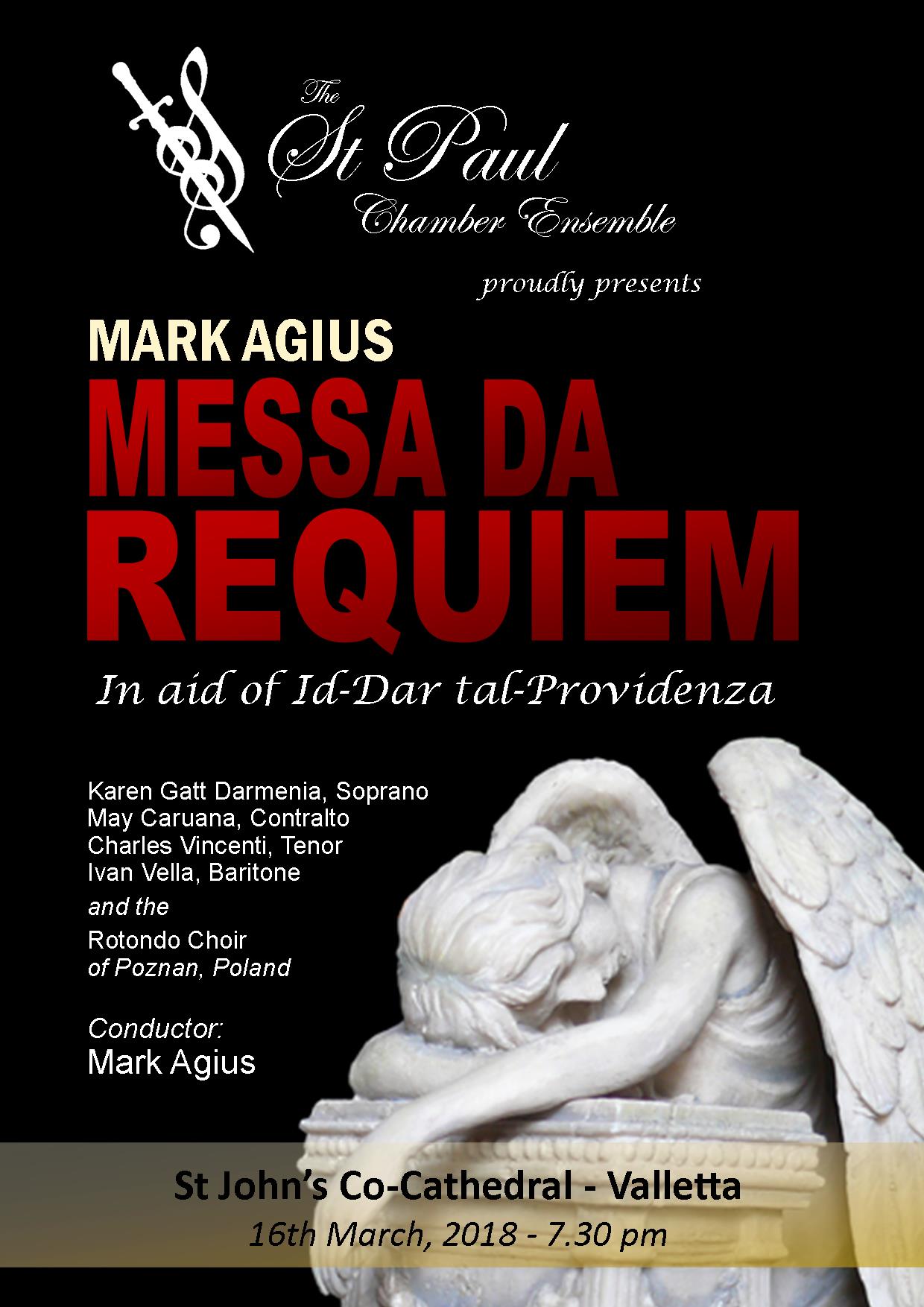 On the 16th March 2018 the orchestra performed a premiere of its same Mro March Agius at the St. John’s Co-Cathedral. Messa da Requiem (2017) is the latest work by Mro Mark Agius. It is a work in eight movements, these being the Introit, Kyrie, Sequence (Dies Irae), Sanctus, Agnus Dei, Pie Jesu, Libera Me and In Paradisium and is scored for orchestra, soloists, and SATB choir. The soloists were Karen Gatt Darmenia (Soprano), May Caruana (Controalto), Charles Vincenti (Tenor), Ivan Vella (Baritone), together with the Rotondo choir of Poznan, Poland. This concert was once more held in aid of Id- Dar tal- Providenza. 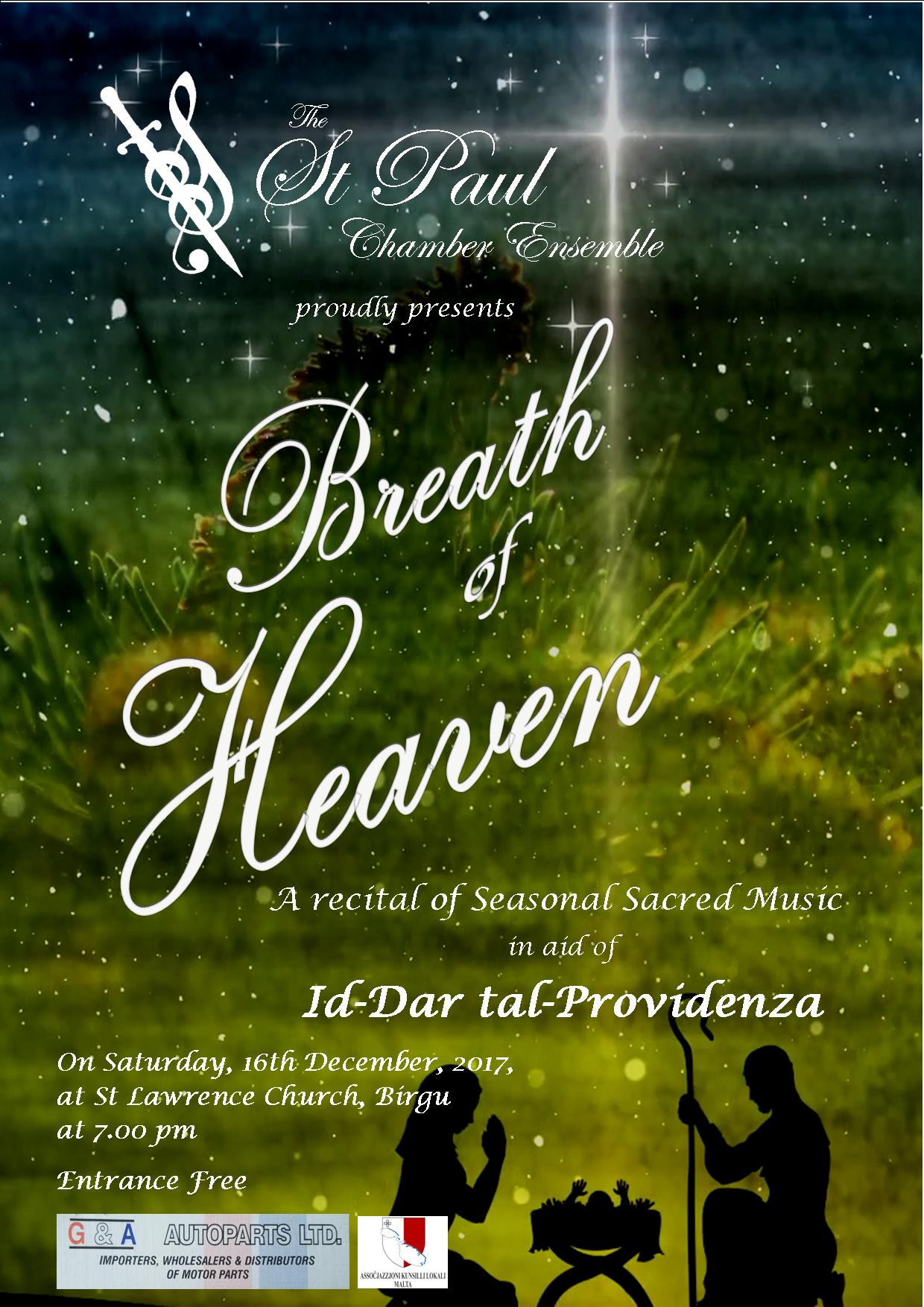 St Paul Chamber Ensemble presented its the third and final performance of the Autumn Sacred Music Series 2017, Breath of Heaven. This Christmas recital was a joyful celebration of seasonal music by one of Malta’s foremost musical ensembles at St Laurence Church, Birgu, on Saturday, 16th December. 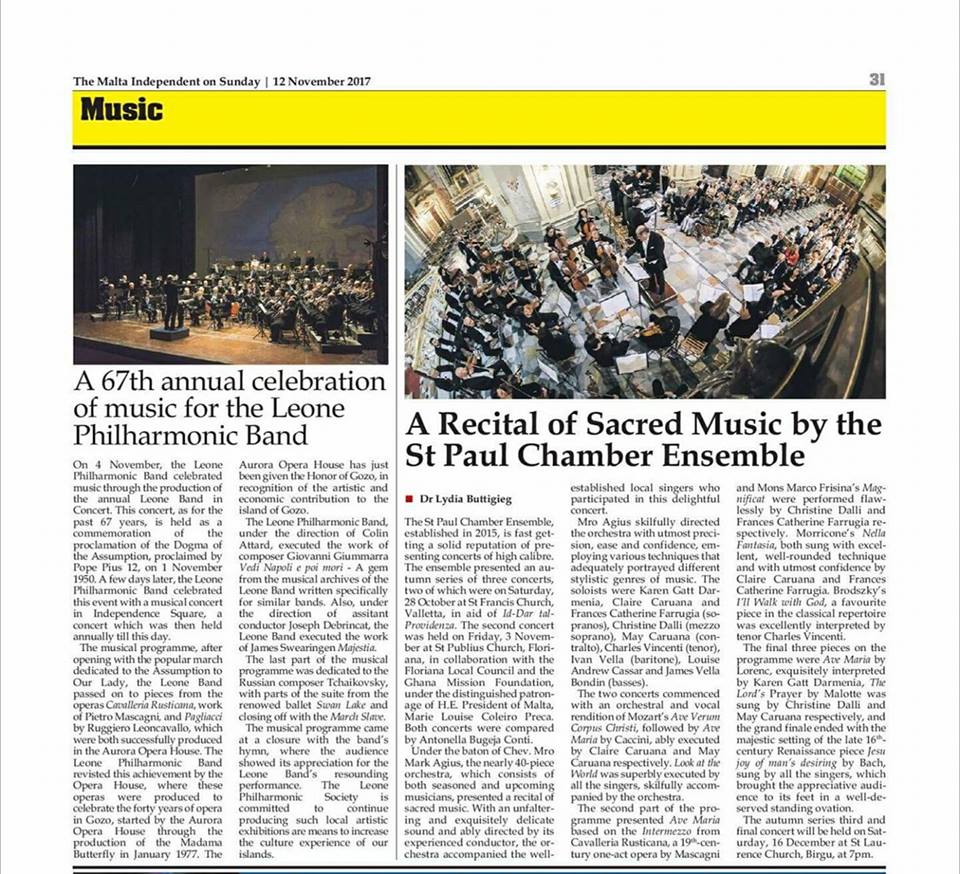 The October recital was performed at St Francis’ Church, Valletta, with proceeds going towards id-Dar tal-Providenza.

The following concert, HOPE was held at St Publius’ church in Floriana under the distinguished patronage of HE the President of Malta, Ms Marie Louise Coleiro Preca and attended by HE Mrs Mercy Bampo Addo the High Commissioner of Ghana to Malta and other distinguished guests.  Proceeds from this concert went in aid of HopeXchange Medical Centre in Ghana.  Further collaborations with HopeXchange are being discussed.

Whilst entrance to these concerts was free of charge, over €2000 euro where collected over the two performances for the respective charities.

An Article was published on the Independent on Sunday 12.11.2017 by Dr Lydia Buttigieg, relating to these first two concerts of the Autumn Series 2017 by the St. Paul Chamber Ensemble under the direction of HE Chev Mro Mark Aguis. 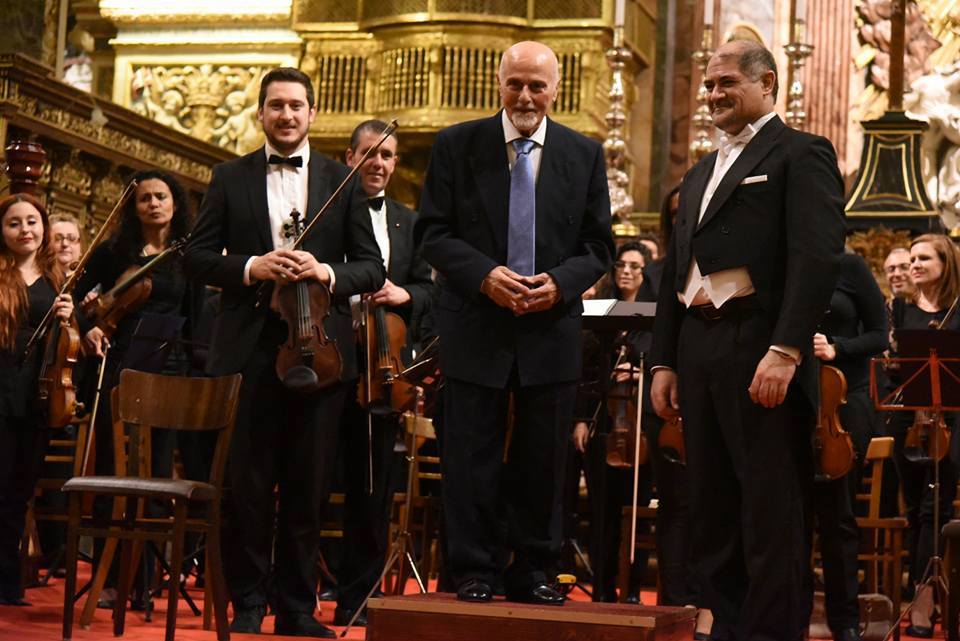 On the 31st of March, 2017, the St Paul Chamber Ensemble, under the direction of Mro Mark Agius performed two contemporary sacred works by Maltese composers at St John’s Co-Cathedral in Valletta: the Messa Solemnis Sancti Martiri, a work by Mro Agius himself, scored for four soloists, choir and orchestra, and the Canticles of St Luke, a work by Mro Joseph Sammut for tenor, mezzo-soprano, female choir and chamber orchestra which had been awarded the Juror’s Prize in the APS Bank Competition for Composers.  Soloists for theMessa Solemnis Sancti Martiri were sopranos Karen Gatt Darmenia and Analise Psaila, mezzo-soprano Christine Dalli, contralo May Caruana, tenor Charles Vincenti, baritone Ivan Vella and bass Noel Galea. Soloists for the Canticles of St Luke were mezzo-soprano Claire Massa and tenor Charles Vincenti, accompanied by the Santa Marija Choir of Attard.  Both works were very well received by a well attended and appreciative audience. The evening took an unexpected turn when a frail Mro Sammut, now in his nineties, after congratulating the orchestra, asked if he might be allowed to conduct the opening movement of his work for what might possibly be the last time.  Taking to the podium, his years shed away as he conducted the orchestra in the opening bars of the movement, bringing the audience to its feet in a tearful ovation. Mro Sammut was then presented with an Honorary Patronage of the Medina Foundation by Foundation Chairman and CEO Mro Mark Agius and Deputy Chair Person Ms Karen Gatt Darmenia in recognition of his contribution to music in Malta. 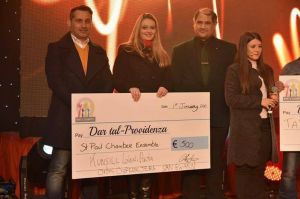 The sum of €500 was collected during a recital of seasonal sacred music by the St Paul Chamber Ensemble, Gaudete, which was held at Christ the King parish church, Paola, in collaboration with the Paola Local Council and the Grand Priory of Malta of the Sovereign Hospitaller Order of St John of Jerusalem, Knights of Malta on the 13th December, 2017 to celebrate the 150th anniversary from the dedication of the parish church.  The evening was under the patronage of HE Mons Joseph Alessandro, Bishop of Garissa, Kenya. 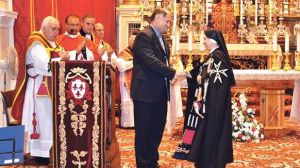 On the feast day dedicated to St Ursula, theSt Paul Chamber Ensemble premierred the Missa Solemnis Sancti Martiri and Antifon to St Ursula, works for choir, soloists and chamber ensemble by Mro Mark Agius at the Monastery of the Cloistered Gerosolimitan Nuns of St Ursula where Mro Agius serves as Maestro di Cappella. Holy Mass was celebrated by the archbishop of Malta, HE Mons Charles J. Scicluna and attended by members of the Sovereign Military Order of Malta. At the end of the mass Mro Agius presented the Mother Prioress, Sr Agnes Zammit with a copy of the scores. 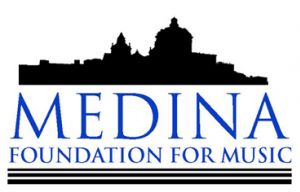 On the 16th of September 2016 the Commissioner for Voluntary Organisations confirmed the Medina Foundation for Music’s enrollment with his office as a Voluntary Organisation with registration number 1332.  The Medina Foundation for Music has been certified as a registered organisation and satisfies the provisions of the Second Schedule of the Civil Code and has been registered as a Legal Person by the Registrar for Legal Persons. 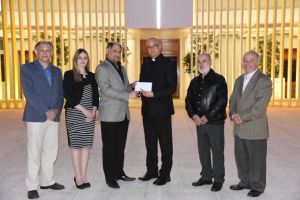 The sum was collected during a recital of sacred music, In Memoriam, by the St Paul Chamber Ensemble, organised in collaboration with the Siggiewi Local Council, the Sovereign Hospitaller Order of St John of Jerusalem, Knights of Malta and the Russian Grand Priory of Malta, Knights Hospitaller, to commemorate the life of Rev Fr VicGeorge Vassallo, Chaplain of the Russian Grand Priory. 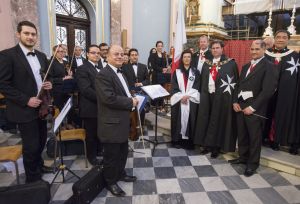 Installation of the Prince Grandmaster of the Sovereign Hospitaller Order of St John
The Medina Foundation for Music is a Voluntary Organisation registered with the Office of the Commissioner of Voluntary Organisations, having satisfied the provisions of the Second Schedule of the Civil Code and has been registered as a Legal Person by the Registrar for Legal Persons.
Registration Number: 1332
Date of Enrollment: 16th September 2016
Copyright: Medina Foundation for Music
Designed by Sector11
Sponsored by Eyetech Ltd.