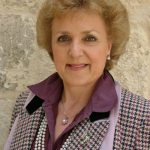 Over the years, Ms Vassallo has won several international singing competitions, such as the Festival Del Grappolo D’Oro, the Vulcano D’Oro and the Festival Della Canzone Mediterranea. In 1986 and 1987, Ms Vassallo represented Malta in the April Spring Friendship Art Festival in D.P.R. Korea. In 1997, she represented Malta in Tunisia in an international gathering of artists from all over the Mediterranean.

Ms Vassallo was one of the founders of the Ghaqda Kantanti Lirici Maltin (Association of Maltese Lyrical Singers) and has been its President since 1990. She is involved in the organisation and presentation of concerts all over the Maltese Islands. Since 1990 and for many years after that, she held the position of Concert Organiser of the Malta Cultural Institute becoming its Director in May 2004.

Ms Vassallo has performed extensively both in Malta and abroad. Her repertoire includes a very wide range of operas, oratorios, musicals and sacred music, both by Maltese and foreign composers.

She is also an Associate Member of the Performing Rights Society of London as an author. With the co-operation of the Russian Cultural Centre in Valletta, she organises the Melita-Rossia Competition for Maltese Lyrical Singers.

In 2000, Ms Vassallo was invited by the Russian Society for Friendship and Cultural Relations to represent Malta on the judging panel of the prestigious Bella Voce International Competition for Lyrical Voices which was held in Moscow.

Ms Vassallo runs the Marie Therese Vassallo Voice Studio. She also directs the choral group Voice Studio Ensemble, which performs regularly in prestigious venues and is the resident choir of Balluta’s parish church. She also holds the position of Director of the MuziKanti Ensemble which is a group of singers and since October 2009 she has been the Director of the 3E Choir at the University of Malta.

In 1967, Ms Vassallo’s song Bit-Tlikki Tlikki, with her lyrics and her father’s music was published by Keith Prowse Publishing Co. Ltd., London and also by Peter Morris, Milan.

On the 31st March, 2018, she was awarded an Honorary Patronage of the Medina Foundation for Music in recognition of her lifetime of dedication to music and her contribution to the development of music in Malta.

Marie Therese Vassallo is married to Charles Axiak who is also a musician and they have two sons.

Ms Vassallo is a Dame in the prestigious Military and Hospitaller Order of St Lazarus of Jerusalem, where she holds the position of Dame of Grace (DCLJ).

Back to Honorary Patrons